nofollow
Your One-Stop Holiday Shop! Join Sam’s Club Plus for 45% Off
Give $10, Get $10
This giveaway has ended
Congratulations to
Brian M.

You’re about to step into a larger world. With the Meta Quest 2 Bundle, you get an amazing bundle of products that can take you to new worlds. Ready for liftoff? 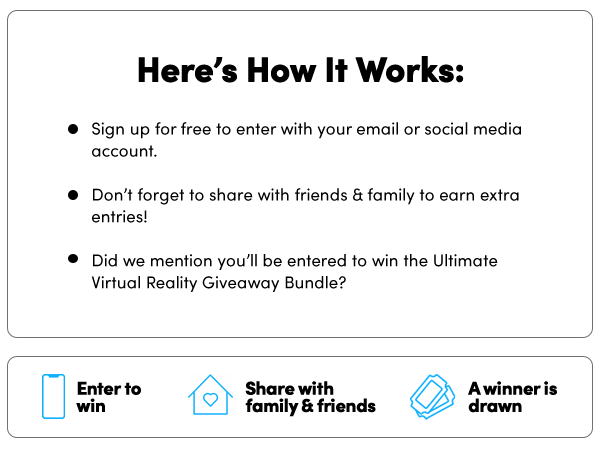 NO PURCHASE NECESSARY TO ENTER OR WIN. A PURCHASE DOES NOT INCREASE YOUR CHANCES OF WINNING. VOID WHERE PROHIBITED. The StackCommerce 2022 The Ultimate Virtual Reality Giveaway (the “Promotion”) begins at 3:00:00 AM Pacific Time (“PT”) on June 4th, 2022 and ends at 11:59:00 PM PT on October 2nd, 2022 (the “Promotion Period”). The Promotion contains a game of chance (“Sweepstakes”). The computer clock of the Sponsor (defined below) is the official time-keeping device in the Promotion.

NOTICE OF PANDEMIC: DUE TO THE UNPRECEDENTED NATURE OF THE COVID-19 PANDEMIC, SPONSOR RESERVES THE RIGHT TO LIMIT, EXTEND, REVISE, OR CANCEL THE PROMOTION IN ITS SOLE DISCRETION AT ANY TIME.

GENERAL: Each winner hereby expressly grants to the Promotion Parties and their respective designees all rights to use and publish his/her name, likeness (photographic or simulated), voice, and province of residence for all purposes, including without limitation, advertising, marketing, promotional and publicity purposes in connection with this Promotion (“Advertising”), in any and all media now or hereafter devised, worldwide in perpetuity, without any form of notice or any amount or kind of compensation or permission, except where prohibited by applicable law. All copyright, trademark or other intellectual property rights in such Advertising shall be owned by Sponsor and/or its licensors, and each winning participant hereby disclaims and waives any claim of right to such Advertising. Such Advertising shall be solely under the control of Sponsor and/or its licensors, and each winner hereby waives any claim of control over the Advertising content as well as any possible claims of misuse of such winning recipient’s name, likeness or voice under contract, tort, privacy, or any other theory of law. The Promotion Parties do not assume any responsibility for any disruption in the Promotion Parties, including but not limited to the failure or interruption of any third party platform used to share a referral code such as Instagram or Facebook or any internet service provider. In the event there is a discrepancy or inconsistency between disclosures and other statements contained in any Promotion materials and the terms and conditions of these Official Rules, these Official Rules shall prevail, govern, and control. In no event will more prizes be awarded than those listed in Rule 5. All federal, state, and local laws and regulations apply. All decisions as to these Official Rules and interpretations thereof are exclusively within the sole discretion of the Promotion Parties and may be changed from time to time without notice. The Promotion Parties reserve the right to cancel or modify the Promotion at any time without notice. A potential winner may be requested to provide the Sponsor with proof that the potential winner is the authorized account holder of the email address associated with the winning Entry. The authorized account holder of an email address shall mean the natural person assigned to such account by the Internet access provider, online service provider, or other organization responsible for assigning email addresses for the domain associated with such account. If, in Sponsor’s sole determination, a dispute cannot be resolved, the Entry will be deemed ineligible. Entries generated by a script, macro or other automated means (including Entries submitted by a sweepstakes service) will be disqualified and transmissions from these or related mailing, email or IP addresses may be blocked. Entries that are incomplete, illegible, garbled, or corrupted are void and will not be accepted.

We take pride in curating the latest and greatest creative technology products around the globe. We personally research and hand-pick each product to ensure it meets our standards.